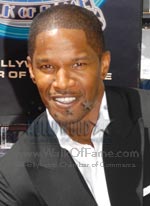 Eric Marlon Bishop, professionally known as Jamie Foxx, is an American actor, stand-up comedian, and singer. As an actor, his work in the film Ray earned him the Academy Award and BAFTA Award for Best Actor as well as the Golden Globe Award for Best Actor in a musical/comedy. He is also a Grammy Award winning musician, producing two albums which have charted highly on the Billboard 200: Unpredictable, which topped the chart, and Intuition.

Foxx was born as Eric Marlon Bishop on December 13, 1967, in Terrell, Texas. He is the son of Louise Annette Talley Dixon and Darrell Bishop. Foxx was abandoned seven months after birth, and was subsequently adopted and raised in Terrell by his mother’s adoptive parents, Estelle and Mark Talley. Terrell was a racially segregated community at the time. Foxx had a strict Baptist upbringing and began piano lessons at the age of five by his grandmother’s orders. As a teenager, he was a part-time pianist and choir leader in Terrell’s New Hope Baptist Church.

Foxx attended Terrell High School, where he received top grades, played basketball and football as quarterback, and had an ambition to play for the Dallas Cowboys. He was the first player in the school’s history to pass for more than 1,000 yards. He also sang in a band called Leather and Lace. After completing high school, Foxx received a scholarship to United States International University, where he studied classical music and composition. He has often acknowledged his grandmother’s influence in his life as one of the greatest reasons for his success.

After accepting a girlfriend’s dare, Foxx told jokes and did impressions at a comedy club’s open mic night in 1989. When he found that female comedians were often called first to perform, he changed his name to Jamie Foxx, feeling that it was an ambiguous enough name to disallow any biases. He chose his surname as a tribute to comedian Redd Foxx. In addition his recurrent In Living Color character LaWanda shared names with Redd’s friend and co-worker, LaWanda Page.