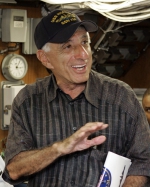 Jamie Farr is an American television and film actor. He is best known for playing the role of cross-dressing Corporal Maxwell Q. Klinger in the television sitcom M

Farr was born Jameel Joseph Farah in [[Toledo, Ohio, to Lebanese American parents Jamelia M., a seamstress, and Samuel N. Farah, a grocer. He was raised in the Antiochian Orthodox religion. Farr’s first acting success occurred at age 11 when he won $2 in a local acting contest. After Woodward High School, where he was one of the standouts among his class, Farr attended the Pasadena Playhouse where an MGM talent scout discovered him, offering him a screen-test for Blackboard Jungle. He won the role of the mentally challenged student, Santini.

Farr’s first film roles were in 1955, in Blackboard Jungle and as a fruit vendor in Kismet. Although Farr was off to a promising start, roles were infrequent for the young actor, and he took jobs as a delivery person, a post office clerk, an army surplus store clerk, an airlines reservations agent, and as an employee at a chinchilla ranch, all in all not very crediting roles. In 1958 Warner Brothers cast him as an airman in the Andy Griffith military comedy No Time for Sergeants, which also brought the young TV comic Don Knotts to motion pictures. Farr appeared as Thaddaeus in the 1965 film The Greatest Story Ever Told, along with minor roles in Who’s Minding the Mint? and With Six You Get Eggroll”.