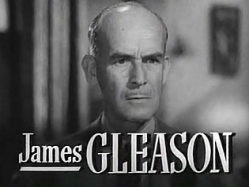 James Austin Gleason was an American actor born in New York City. He was also a playwright and screenwriter.

Balding and slender with a craggy voice and a master of the double-take, Gleason portrayed tough but warm-hearted characters, usually with a New York background. He appeared in several movies with his wife Lucille.

Gleason co-wrote The Broadway Melody, the second film to win the Academy Award for Best Picture, and had a small uncredited role in it. Gleason also co-wrote and briefly appeared as a hot dog vendor in the 1934 Janet Gaynor vehicle Change of Heart. He played a milk cart driver who gives lessons in marriage to Judy Garland and Robert Walker in the 1945 film, The Clock, while Lucille played his wife. In the same year, he played the bartender in the film adaptation of A Tree Grows in Brooklyn.