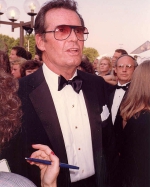 James Garner is an American film and television actor.

He has starred in several television series spanning a career of more than five decades. These included his roles as Bret Maverick, in the popular 1950s western-comedy series, Maverick; Jim Rockford, in the popular 1970s detective drama, The Rockford Files; and the father of Katey Sagal's character on 8 Simple Rules following the death of John Ritter. He has starred in dozens of movies, including The Great Escape with Steve McQueen; Paddy Chayefsky's The Americanization of Emily and Blake Edwards' Victor Victoria, both with Julie Andrews; and Murphy's Romance with Sally Field, for which he received an Academy Award nomination.

Garner, the youngest of three children, was born James Scott Bumgarner in Norman, Oklahoma, the son of Mildred and Weldon Warren Bumgarner, a carpet layer. His mother, who was half Cherokee, died when he was five years old. After their mother's death, Garner and his brothers were sent to live with relatives. Garner was reunited with his family in 1934, when Weldon remarried.

Garner grew to hate his stepmother, Wilma, who beat all three boys, especially young James. When he was fourteen, Garner finally had enough of his 'wicked stepmother' and after a particularly heated battle, she left for good. James' brother Jack commented, "She was a damn no-good woman". Garner admitted that his stepmother punished him by forcing him to wear a dress in public and that he finally engaged in a physical fight with her, knocking her down and choking her to keep her from killing him in retaliation. This incident ended the marriage.