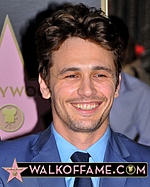 James Franco Honored with
Star on the Hollywood Walk Of Fame

Watch the complete James Franco Walk of Fame star ceremony at the end of this page.

Emcee Leron Gubler, President/CEO of the Hollywood Chamber of Commerce and guest speakers Sam Raimi and Seth Rogen helped Franco unveil the 2,492nd Star in the Category of Motion Pictures at 6838 Hollywood Boulevard in front of the El Capitan Theatre. The ceremony was streamed LIVE on www.walkoffame.comfor everybody to watch and enjoy.

James Franco’s metamorphosis into the title role of the TNT biopic James Dean earned him career-making reviews, as well as a Golden Globe for Best Actor in a Motion Picture made for Television.  He also received nominations for an Emmy and Screen Actors Guild Award for this memorable performance.  Franco earned an Independent Spirit Award for Best Male Lead as well as nominations for an Academy Award, a Golden Globe Award and a Screen Actors Guild Award and recognition from numerous critics’ associations for his starring role in Danny Boyle’s critically acclaimed drama 127 Hours.  His performance alongside Sean Penn in Gus Van Sant’s Milk earned an Independent Spirit Award for Best Supporting Actor; and he was nominated for a Golden Globe for his role in David Gordon Green’s comedy Pineapple Express, where he starred opposite Seth Rogen. He is also known for his starring role as Harry Osbourne in Sam Raimi’s Spider-Man trilogy.

In addition, Franco recently starred in the successful reboot of the Planet of the Apes franchise Rise of the Planet of the Apes. He also starred in Ryan Murphy’s Eat, Pray, Love alongside Julia Roberts and he was a part of an all-star ensemble cast in Shawn Levy’s comedy Date Night. He will next be seen in Disney's OZ THE GREAT AND POWERFUL, directed by Sam Raimi, which opens in theaters nationwide on March 8, 2013.  He will also star in Harmony Korine's Spring Breakers, followed by The End of the World where he stars with Seth Rogen, Jonah Hill and Danny McBride. He will again co-star with Jonah Hill in True Story for New Regency.

Franco’s additional credits include Rob Epstein and Jeffrey Friedman’s Howl, where he played the famous poet Allen Ginsberg; George C. Wolfe’s Nights in Rodanthe; Paul Haggis’ In The Valley of Elah; Karen Moncrieff‘s ensemble drama The Dead Girl; Tommy O’Haver’s drama An American Crime; John Dahl’s The Great Raid; Robert Altman’s The Company; as well as City by the Sea opposite Robert DeNiro; and the Martin Scorsese-produced Deuces Wild. On television, he starred in the critically-acclaimed series Freaks and Geeks.

Franco has been honored by and participated in the following charities:  Art of Elysium, 826DC, amfAR and the Escalade Foundation. 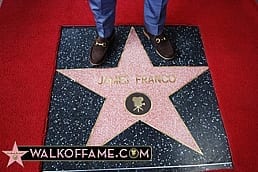