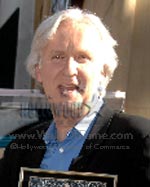 Oscar winning director James Cameron was honored with the 2,396th star on the Hollywood Walk of Fame. Leron Gubler, President and CEO of the Hollywood Chamber of Commerce, presided over the ceremony. Guests included Governor Arnold Schwarzenegger, Sigourney Weaver, and the rest of the cast of AVATAR.

Born in Kapuskasing, Ontario, Canada, Cameron grew up near Niagara Falls. In 1971, he moved to Brea, California where he studied physics at Fullerton College while working as a machinist and, later, a truck driver. Cameron quit his trucking job in 1978 and raised money from local dentists to produce a 35mm short film.

The visual effects in this film led to work on Roger Corman's BATTLE BEYOND THE STARS (1980), on which he served as production designer, matte artist and visual effects DP. The next year he became second unit director on Corman's subsequent sci-fi thriller, GALAXY OF TERROR.

In 1983 Cameron wrote three scripts: RAMBO: FIRST BLOOD PART 2, ALIENS, and THE TERMINATOR. He directed THE TERMINATOR, starring Arnold Schwarzenegger, in 1984. It became an unexpected box office hit and made Time Magazine's "Ten Best of the Year" List.

His films have blazed new trails in visual effects and set numerous performance records, both domestically and abroad. TITANIC currently holds both the domestic and worldwide box office records having grossed over $1.8 billion at the global box-office. Cameron's films have also earned numerous nominations and awards from a variety of organizations, culminating in TITANIC's 14 Academy Award nominations (a record) and 11 Oscars (the most any movie has received), including Cameron's three Oscars for Best Picture, Best Direction and Best Editing.

In 1999, Cameron co-created the one-hour television series DARK ANGEL. The show ran for two seasons on the Fox Network and gained a loyal following and a number of prestigious nominations and awards, including the 'People's Choice Award' for 'Best New Television Drama'. It also launched a new star: Jessica Alba.

Cameron also set to work on a digital 3-D camera system, which he developed with partner Vince Pace. The goal was to bring back the experience of deep ocean exploration with unprecedented clarity to a global audience.

Using this new camera system, Cameron proceeded to make underwater documentaries with his company, Earthship Productions. His team's historic exploration of the inside of Titanic was the subject of Cameron's 3-D Imax film, GHOSTS OF THE ABYSS. In May of 2002, Cameron guided his robotic cameras inside the wreck of Bismarck, which resulted in groundbreaking discoveries about the sinking of the legendary German battleship, and the Discovery Channel documentary, JAMES CAMERON'S EXPEDITION: BISMARCK. Cameron's team then made 3 expeditions to deep hydrothermal vent sites in the Atlantic, Pacific and Sea of Cortez over a two-year period, which became the subject of ALIENS OF THE DEEP, also released in 3D Imax. He was joined in his exploration of these extreme environments by a team of young scientists and marine biologists to study how life forms discovered there represent life we may one day find on other planets and moons in our solar system. Most recently, Cameron returned again to the Titanic to complete his interior exploration of the ship, which was showcased in the Discovery Channel's program, LAST MYSTERIES OF THE TITANIC.

Cameron continues to work with his engineering partner, Vince Pace, to develop camera systems and tools for 3D photography, for movies, documentaries, sports and special events. Their Fusion Camera System is the world's leading stereoscopic camera system, and has been used on AVATAR, JOURNEY TO THE CENTER OF THE EARTH, HANNAH MONTANA: BEST OF BOTH WORLDS, U2:3D, as well as numerous special event projects, such as the NBA All Star Game.