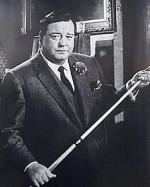 Jackie Gleason was an American comedian, actor and musician. He was known for his brash visual and verbal comedy style, especially by his character Ralph Kramden on The Honeymooners, a situation-comedy television series. His most noted film roles were as Minnesota Fats in the drama film The Hustler starring Paul Newman, and as Buford T. Justice in the Smokey and the Bandit movie series.

Gleason was born at 364 Chauncey Street in Bedford-Stuyvesant, Brooklyn, New York. Originally named Herbert Walton Gleason, Jr., he was baptized as John Herbert Gleason. His parents, both from Faranree, County Cork, Ireland, were Mae Murphy, a subway change-booth attendant, and Herb Gleason, an insurance auditor. Gleason was one of their two children. Gleason’s brother died when he was young, and his father abandoned the family. He attended elementary school at P.S. 73 in Brooklyn. He attended but did not graduate from John Adams High School in Queens and Bushwick High School in Brooklyn. Gleason was raised by his mother, who died when he was 19.

By age 24, Gleason was appearing in movies, first at Warner Brothers as Jackie C. Gleason in such films as Navy Blues with Ann Sheridan and Martha Raye and All Through the Night with Humphrey Bogart; then at Columbia Pictures for the B military comedy Tramp, Tramp, Tramp ; and finally, at Twentieth Century-Fox, where Gleason played the Glenn Miller band’s bassist in Orchestra Wives. Gleason also had a small part as the soda shop clerk in Larceny, Inc. with Edward G. Robinson, and a modest part as “Commissioner” in the 1942 Betty Grable/Harry James musical, Springtime in the Rockies.

Gleason, however, did not make a strong impression in Hollywood at first. At the same time, he developed a nightclub act that included both comedy and music. He also became somewhat known for hosting all-night parties at his hotel suite. “Anyone who knew Jackie Gleason in the 1940s,” wrote CBS historian Robert Metz, “would tell you The Fat Man would never make it. His pals at Lindy’s watched him spend money as fast as he soaked up the booze.” Gleason’s first recognition as a significant entertainer finally came on Broadway, when he appeared in the hit musical Follow the Girls .