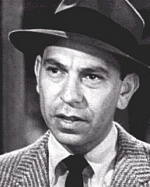 Jack Webb, also known by the pseudonym John Randolph, was an American actor, television producer, director and screenwriter, who is most famous for his role as Sergeant Joe Friday in the radio and television series Dragnet. He was also the founder of his own production company, Mark VII Limited.

Born in Santa Monica, California, Webb grew up in the Bunker Hill section of Los Angeles. His Jewish father left home before Webb was born, and Webb never knew him. He was raised a Roman Catholic by his Irish-Indian mother. One of the tenants in his mother’s rooming house was an ex-jazzman who began Webb’s lifelong interest in jazz by giving him a recording of Bix Beiderbecke’s “At the Jazz Band Ball.” Webb graduated from Belmont High School in Los Angeles. He then studied art. During World War II, Webb enlisted in the United States Army Air Forces. After washing out of flight training, he applied for and received a hardship discharge, which he legitimately deserved being the primary financial support for his mother and grandmother.

Following his discharge, he moved to San Francisco to star in his own radio show on ABC’s KGO Radio. The Jack Webb Show was a half-hour comedy that had a limited run on ABC radio in 1946. By 1949 he had abandoned comedy for drama, and starred in Pat Novak for Hire, a radio show about a man who worked as an unlicensed private detective. The program co-starred Raymond Burr. Pat Novak was notable for writing that imitated, almost to parody, the hard-boiled style of such writers as Raymond Chandler, with lines such as: “She drifted into the room like 98 pounds of warm smoke. Her voice was hot and sticky–like a furnace full of marshmallows.”

Webb’s radio shows included Johnny Modero, Pier 23; Jeff Regan, Investigator; Murder and Mr. Malone and One Out of Seven. Webb did all of the voices on One Out of Seven”, often vigorously attacking racial prejudice.