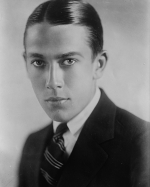 Jack Pickford was a Canadian-born American actor. He was best known for his tabloid lifestyle, marriage to the top starlets of his day, and being of the famous Pickford acting family.

Born John Charles Smith in Toronto, Ontario, Canada to John Charles Smith and Charlotte Hennessy Smith in 1896. His alcoholic father left the family while Pickford was a young child. This incident left the family impoverished. In desperation Charlotte Hennessy allowed Pickford and his two sisters Gladys and Lottie to appear onstage. This proved a good source of income and by 1900 the family was based in New York City acting in plays across the United States.

Due to the work the family was constantly separated until 1910 when Gladys signed with Biograph Studios. By that time his sister ‘Gladys Smith’ had been transformed into Mary Pickford. Following suit, the Smiths changed their stage names to ‘Pickford’.

Soon after signing with Biograph, Mary secured jobs for all the family, including the then-fourteen-year-old Jack. When the Biograph Company headed West to Hollywood, CA, only Mary was to go, until Jack pleaded he could join the company as well. Much to Mary’s protest, Charlotte threw him on the train as it left the station. The company arrived in Hollywood where Jack acted in bit parts during the stay.