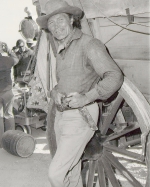 Volodymyr Palahniuk, known professionally as Jack Palance, was a Ukrainian American film actor. During half a century of film and television appearances he was nominated for three Academy Awards, all as Best Actor in a Supporting Role, winning in 1991 for his role in City Slickers.

Palance, one of five children, was born Volodymyr Palahniuk in the Lattimer Mines section of Hazle Township, Pennsylvania, the son of Anna and Ivan Palahniuk, who was an anthracite coal miner. Palance’s parents were Ukrainian immigrants, his father a native of Ivane Zolote in Southwestern Ukraine and his mother from the Lviv region. He worked in coal mines during his youth before becoming a boxer.

In the late 1930s, Palance started a professional boxing career. Fighting under the name Jack Brazzo, Palance reportedly compiled a record of 15 consecutive victories with 12 knockouts before fighting the future heavyweight contender Joe Baksi in a “Pier-6” brawl. Palance lost a close decision, and recounted: “Then, I thought, you must be nuts to get your head beat in for $200”.

With the outbreak of the Second World War, Palance’s boxing career ended and his military career began as a member of the United States Army Air Forces. Palance’s rugged face, which took many beatings in the boxing ring, was disfigured when he bailed out of a burning B-24 Liberator bomber while on a training flight over southern Arizona, where he was a student pilot. Plastic surgeons repaired the damage as best they could, but he was left with a distinctive, somewhat gaunt, look. After much reconstructive surgery, he was discharged in 1944. 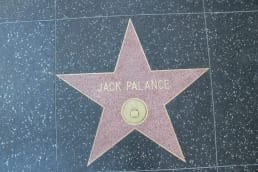