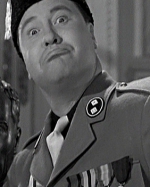 Jack Oakie was an American actor, starring mostly in films, but also working on stage, radio and television.

Oakie was born as Lewis Delaney Offield in Sedalia, Missouri. He grew up in Muskogee, Oklahoma, the source of his “Oakie” nickname. His adopted first name, Jack, was the name of the first character he played on stage.

Oakie worked as a runner on Wall Street, New York, and narrowly escaped being killed in the Wall Street bombing of 16 September 1920. While in New York, he also started appearing in amateur theatre as a mimic and a comedian, finally making his professional debut on Broadway in 1923 as a chorus boy in a production of Little Nellie Kelly by George M. Cohan.

Oakie worked in various musicals and comedies on Broadway from 1923 to 1927, when he moved to Hollywood to work in movies at the end of the silent film era. Oakie appeared in five silent films during 1927 and 1928. As the age of the “talkies” began, he signed with Paramount Pictures, making his first talking film, The Dummy, in 1929.