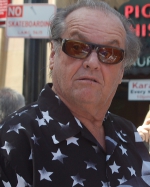 John Joseph “Jack” Nicholson is an American actor, film director and producer. He is renowned for his often dark-themed portrayals of neurotic characters.

Nicholson has been nominated for Academy Awards twelve times. He won the Academy Award for Best Actor twice, for One Flew Over the Cuckoo’s Nest and for As Good as It Gets. He won the Academy Award for Best Supporting Actor for the 1983 film Terms of Endearment. He is tied with Walter Brennan for most acting wins by a male actor, and second to Katharine Hepburn for most acting wins overall. He is also one of only two actors nominated for an Academy Award for acting in every decade from the 1960s to 2000s. He has won seven Golden Globe Awards, and received a Kennedy Center Honor in 2001. In 1994, he became one of the youngest actors to be awarded the American Film Institute’s Life Achievement Award.

Notable films in which he has starred include, in chronological order, Easy Rider, Five Easy Pieces, Chinatown, One Flew Over the Cuckoo’s Nest, The Shining, Reds, Terms of Endearment, Batman, A Few Good Men, As Good as It Gets, About Schmidt, Something’s Gotta Give, and The Departed.

Nicholson was born in St. Vincent’s Hospital in New York City, the son of a showgirl, June Frances Nicholson. June had married Italian American showman Donald Furcillo six months earlier in Elkton, Maryland, on October 16, 1936. Elkton was a town known for its “quickie” marriages. Furcillo, however, was already married, and, although he offered to take care of the child, June’s mother Ethel insisted that she bring up the baby, partly so that June could pursue her dancing career. Although Donald Furcillo claimed to be Nicholson’s father and to have committed bigamy by marrying June, biographer Patrick McGilligan asserted in Jack’s Life that Latvian-born Eddie King, June’s manager, may be the father, and other sources have suggested that June Nicholson was unsure of who the father was. Nicholson’s mother was of Irish, English, and Dutch descent though he and his family self-identified as Irish.