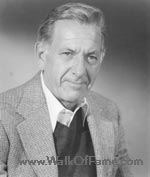 In memory of actor Jack Klugman, flowers were placed on his star on the Hollywood Walk of Fame on Monday, December 24, 2012. The star in Television category is located at 6555 Hollywood Blvd. “Rest in Peace, Mr. Klugman!” the card was signed on behalf of the Hollywood Historic Trust and the Hollywood Chamber of Commerce.

Jacob Joachim "Jack" Klugman is an American stage, film, and television actor known for his roles in sitcoms, movies, television, and on Broadway. He is perhaps best-known for his role as actor Tony Randall's sloppy roommate Oscar Madison in the American television series The Odd Couple during the 1970s and for his starring role in Quincy, M.E. in the 1970s and 1980s. Klugman attended Carnegie Mellon University and graduated in 1948. In 1957, he appeared in the film 12 Angry Men as Juror #5 and is the last surviving actor who played a juror in that movie.

Born in Philadelphia, Jack Klugman began acting after serving in the United States Army during World War II. A struggling actor in New York City, Klugman was a roommate of fellow actor Charles Bronson before he and Bronson became successful.

Klugman starred in several classic films including 12 Angry Men in 1957, Days of Wine and Roses in 1962, and Goodbye, Columbus in 1969. He had also won an Emmy Award for his work on the television series The Defenders and appeared in four episodes of the acclaimed series The Twilight Zone. Klugman says his greatest thrill was appearing with Humphrey Bogart and Henry Fonda in a 1955 live television broadcast of The Petrified Forest.