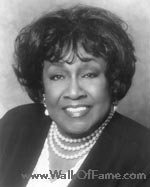 Isabel Sanford was an American actress best known for her role as Louise “Weezy” Jefferson on the CBS television sitcoms All in the Family and The Jeffersons. Born Eloise Gwendolyn Sanford in New York City, New York to parents James Edward Sanford and the former Josephine Perry. Sanford was the first African-American actress to win a Lead Actress Emmy Award, and has a star on the Hollywood Walk of Fame. She was a member of Alpha Kappa Alpha Sorority, and received an honorary doctorate degree from Emerson College in Boston, Massachusetts.

During the 1960s, Sanford worked in the theatre industry, and in 1967 she made her film debut in Guess Who’s Coming to Dinner, playing the critically acclaimed role of the maid Tillie Binks. She caught the attention of major Hollywood players, including Norman Lear, who cast Sanford in the role of Louise Jefferson in All in the Family. She almost turned down the role after receiving a bucket of fried chicken in her dressing room, which in those days was a racist stereotype as a favorite food of African-Americans. Norman Lear assured her that it was a genuine gift, and she eventually agreed to play the part. Sanford and her TV husband, Sherman Hemsley, were so popular that The Jeffersons was spun off into its own series.

After production of The Jeffersons ended in 1985, Sanford realized that she and Hemsley were typecast by their Jeffersons’ roles. Sanford was mostly limited to guest TV appearances and cameo appearances in movies, appearing in The Fresh Prince of Bel-Air, Dream On, Roseanne, Living Single, Hangin’ with Mr. Cooper, In the House and The Steve Harvey Show, as well as the extremely short-lived 1992 CBS Hearts Are Wild. She also did voice acting for The Simpsons in her final television appearance before her death.