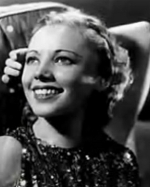 Isabel Jewell was an American actress most active in the 1930s and early 1940s.

Born in Shoshoni, Fremont County, Wyoming, Jewell was a Broadway actress who achieved immediate success and glowing critical reviews in two productions, Up Pops the Devil and Blessed Event. She was brought to Hollywood for the film version of the latter, by Warner. Jewell appeared in a variety of supporting roles during the early 1930s. She played stereotypical gangster's women in such films as Manhattan Melodrama and Marked Woman. Jewell was well received playing against type, as an innocent seamstress sentenced to death on the guillotine, in A Tale of Two Cities. Her most significant role was as the prostitute Gloria Stone in Lost Horizon. In the mid-to late 1930s Jewell was seen at nightclubs with William Hopper, but she never married.