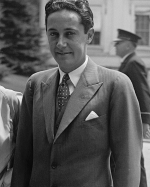 Irving Grant Thalberg was an American film producer during the early years of motion pictures. He was called “The Boy Wonder” for his youth and his extraordinary ability to select the right scripts, choose the right actors, gather the best production staff, and make very profitable films.

Thalberg was born in Brooklyn, New York, to German Jewish immigrant parents. He had a bad heart due to childhood rheumatic fever and was plagued with other ailments all his life. Upon completing high school, he was employed by Universal Pictures’ New York office, where he worked as personal secretary to legendary studio founder Carl Laemmle, the boss of Universal Studios. Irving Thalberg was bright and persistent, and by age 21 was executive in charge of production at Universal City, the studio’s California production site.

He quickly established his tenacity as he battled with Erich von Stroheim over the length of Foolish Wives, and controlled every aspect of the production of The Hunchback of Notre Dame. In 1924, he left Universal for Louis B. Mayer Productions, which shortly thereafter linked up with Metro Pictures Corporation to become Metro-Goldwyn-Mayer. Thalberg became the merged studio’s head of production.

The Big Parade, directed by King Vidor, was Thalberg’s first major triumph at MGM. Until 1932, when he suffered a major heart attack, he supervised every important MGM studio production, and combined careful pre-production groundwork with prerelease sneak previews which measured audience response. He also had full authority to reedit any MGM film.