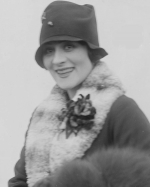 Irene Rich was an American actress who worked in both silent pictures and talkies.

Born Irene Luther in Buffalo, New York, Rich worked for Will Rogers, who used her in eight pictures including Water Water Everywhere, The Strange Boarder, Jes’ Call Me Jim, Boys Will Be Boys, and The Ropin’ Fool. She commonly played experienced society women. She played this role in the 1925 adaptation of Lady Windermere’s Fan and also in Queen of the Yukon. In two of her last films she played a frontier wife and mother. She was the mother of Gail Russell’s character ‘Penelope Worth’, in John Wayne’s Angel and the Badman as well as in John Ford’s cavalry story Fort Apache in which she portrayed Mrs. O’Rourke, the wife of Sergeant O’Rourke. In the 1930s, Rich did much work in radio. From 1933 to 1944, she hosted a nationwide anthology program of serialized mini-dramas entitled Dear John. Her leading man was actor Gale Gordon, who later played Lucille Ball’s apoplectic boss “Mr. Mooney” on TV. Rich also dabbled in stage in such productions as Seven Keys to Baldpate which starred George M. Cohan and As the Girls Go in 1948.