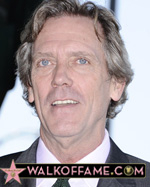 Hugh Laurie Honored with Star on the Hollywood Walk Of Fame

Watch as the Hollywood Chamber honors Hugh Laurie with Walk of Fame star below.

The Hollywood Chamber of Commerce proudly honored actor Hugh Laurie with the 2,593rd star on the Hollywood Walk of Fame on Tuesday, October 25, 2016 at 11:30 a.m. PDT. The star in the category of Television was dedicated in front of the Pig n’ Whistle, 6712 Hollywood Boulevard.

Helping Emcee and Hollywood Chamber President/CEO Leron Gubler to unveil the star were Stephen Fry, Diane Farr and Jean McClain. “The Hollywood Chamber of Commerce is thrilled to add Hugh Laurie to our illustrious Walk of Fame. His star is going to be set in a very appropriate location, a British Pub called the Pig N’ Whistle where he joins other British luminaries such as Emma Thompson, Colin Firth, Ridley Scott and Dame Helen Mirren” stated Walk of Fame Producer Ana Martinez.

Hugh Laurie was born in Oxford, England and attended Eton College and Cambridge University, where he received a degree in Anthropology. This award-winning actor, writer, producer and musician is best known for his scene-stealing roles in television and film.

Laurie next stars as forensic neuro-psychiatrist Eldon Chance in Hulu’s drama “Chance” which premiered on October 19th. He most recently earned his eighth Emmy nomination for his riveting performance on the critically acclaimed AMC miniseries “The Night Manager” which he starred in alongside Tom Hiddleston, Olivia Colman, Tom Hollander and Elizabeth Debicki. Laurie reprised his role as Senator Tom James on the last season of HBO’s Emmy-winning comedy “Veep” opposite Julia Louis Dreyfus.

Laurie previously earned two Golden Globe Awards for his role as Dr. Gregory House on the long-running Fox series “House.”  He starred as the acerbic doctor for eight seasons, earning six Emmy nominations for Outstanding Lead Actor in a Drama Series, an Emmy nomination for Outstanding Drama Series as a producer, and two Screen Actors Guild Awards for Outstanding Performance by a Male Actor in a Drama Series. He has twice been honored by the Television Critics Association with TCA Awards for Individual Achievement in Drama. While it was on the air, “House” received a review score of 9.4 out of 10, making it a Guinness World Record holder for Most Popular TV Show and making Laurie a record holder for Most-Watched Leading Man.

Alongside Stephen Fry, Laurie first broke into television by writing, producing and starring in “The Cellar Tapes,” a revue consisting of a number of sketches and musical numbers which was broadcast on television in 1982. “The Cellar Tapes” propelled the British duo into a number of groundbreaking television shows in the UK such as “A Bit of Fry and Laurie,” which Laurie co-wrote for the BBC with Fry; BBC comedy “Blackadder;” “Jeeves and Wooster,” based on the novels of P.G. Wodehouse which aired on PBS’s “Masterpiece Theatre;” and “Saturday Live,” a comedy music sketch series in which Laurie appeared as himself and a number of various characters. His work on American television includes the television film “Life with Judy Garland: Me and My Shadows” in which Laurie portrayed Vincente Minnelli opposite Judy Davis, and HBO’s “Tracey Takes On…” opposite Tracey Ullman.

Laurie’s film credits include Disney’s “Tomorrowland” with George Clooney which was directed by Brad Bird and written by Damon Lindelof; “Mr. Pip;” “The Oranges” with Oliver Platt and Catherine Kenner; “Street Kings” with Forest Whitaker and Keanu Reeves; “Flight of the Phoenix” with Dennis Quaid; “Peter’s Friends” with Kenneth Branagh; “Sense and Sensibility” with Emma Thompson and Kate Winslet; “Cousin Bette” with Jessica Lange; “The Man in the Iron Mask” with Jeremy Irons and Leonardo DiCaprio; “101 Dalmatians” with Glenn Close and Jeff Daniels; “Stuart Little;” “Stuart Little 2;” and the animated films “Arthur Christmas,” “Hop,” and “Monsters vs. Aliens.”

A talented singer and musician, Laurie has released two albums and performed around the world. After signing a record deal with Warner Bros. Records, Laurie’s celebrated New Orleans blues album “Let Them Talk” was released in the U.S. in 2011. Recorded at sessions in Los Angeles and New Orleans, the musical and vocal collaboration was produced by two-time Grammy Award winner Joe Henry, and became the biggest-selling blues album of the year in the UK. A performance documentary about Laurie’s musical passion, “Hugh Laurie: Let Them Talk – A Celebration of New Orleans Blues” also aired on PBS’s “Great Performances” in 2011. Laurie released his second album, “Didn’t It Rain,” with his band The Copper Bottom Band in April 2013. He also recorded his second PBS special, “Live on the Queen Mary,” which featured an intimate live performance by Laurie and his band filmed aboard the historic Queen Mary in Long Beach. In October 2013, Laurie embarked on a U.S. tour with the Copper Bottom Band. 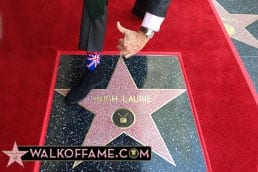