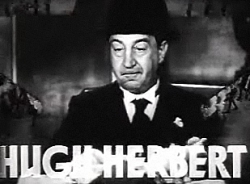 Hugh Herbert was a motion picture comedian. He began his career in vaudeville, and wrote more than 150 plays and sketches.

The advent of talking pictures brought stage-trained actors to Hollywood, and Hugh Herbert soon became a popular movie comedian. His screen character was usually absent-minded and flustered. He would flutter his fingers together and talk to himself, repeating the same phrases: “hoo-hoo-hoo, wonderful, wonderful, hoo hoo hoo!” This catchphrase inspired Daffy Duck’s “hoo hoo, hoo hoo” phrase during the early years of the character. So many imitators copied the catchphrase as “woo woo” that Herbert actually adopted “woo woo” himself in the 1940s.

Herbert’s earliest movies, like Wheeler & Woolsey’s 1930 feature Hook, Line and Sinker, cast him in generic comedy roles that could have been taken by any comedian. Herbert soon developed his own unique screen personality, complete with a silly giggle, and this new character caught on quickly. He was frequently featured in Warner Brothers films of the 1930s, including Footlight Parade, Dames, Bureau of Missing Persons, Fog Over Frisco, Fashions of 1934, Gold Diggers of 1935, as well the 1935 film adaptation of Shakespeare’s A Midsummer Night’s Dream. He also played leads in B comedies, notably Sh! The Octopus, a 1937 comedy-mystery featuring an exceptional unmasking of the culprit. Herbert was often caricatured in Warners’ Looney Tunes shorts of the ’30s and ’40s, such as The Hardship of Miles Standish and Speaking of the Weather.

In 1939 Herbert signed with Universal Pictures, where, as at Warners, he played supporting roles in major films, and leading roles in minor ones. One of his best-received performances from this period is in the Olsen and Johnson comedy Hellzapoppin‘, in which Hugh plays a nutty detective.