Born in Alameda, California, Heidt attended Culver Academies. His band, Horace Heidt and His Musical Knights, toured vaudeville and performed on radio and television through the 1930s and 1940s.

With fame, Heidt moved into the then-new Brentwood neighborhood of West Los Angeles at 1525 San Vicente Boulevard. He bought the mansion from the widow of a retired dentist, which offered stunning views of Santa Monica Canyon, overlooking the Riviera Country Club and Catalina Island on a clear day. The expansive chateau-style residence, featured in 1927 on the cover of the rotogravure magazine Pictorial California, has long since been razed and the property subdivided.

From 1932 to 1953, Heidt was one of the more popular radio bandleaders, heard on both NBC and CBS in a variety of different formats over the years. He began on the NBC Blue Network in 1932 with Shell Oil's Ship of Joy and Answers by the Dancers. During the late 1930s on CBS he did Captain Dobbsie's Ship of Joy and Horace Heidt's Alemite Brigadeers before returning to NBC for 1937-39 broadcasts. 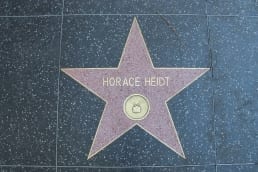