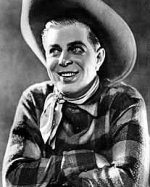 Hoot Gibson was an American rodeo champion and a pioneer cowboy film actor, director and producer.

Born Edmund Richard Gibson in Tekamah, Nebraska, he learned to ride a horse while still a very young boy. His family moved to California when he was seven years old. As a teenager he worked with horses on a ranch, which led to competition on bucking broncos at area rodeos. Given the nickname “Hoot Owl” by co-workers, the name evolved to just “Hoot”.

In 1910, film director Francis Boggs was looking for experienced cowboys to appear in his silent film short, Pride of the Range. Gibson and another future star of Western films, Tom Mix, were hired. Gibson made a second film for Boggs in 1911. After the director was killed by a deranged employee, Gibson was hired by director Jack Conway to appear in his 1912 Western, His Only Son.

Acting for Gibson was then a minor sideline and he continued competing in rodeos to make a living. In 1912 he won the all-around championship at the famous Pendleton Round-Up in Pendleton, Oregon and the steer roping World Championship at the Calgary Stampede.