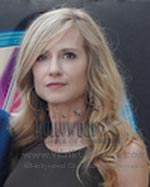 Holly Paige Hunter is an American actress. Her films include Raising Arizona, Broadcast News, Always, and The Piano for which she won several acting awards, including an Academy Award for Best Actress. She also starred in the cable television series Saving Grace.

Holly Hunter was born in Conyers, Georgia, the daughter of Opal Marguerite, a housewife, and Charles Edwin Hunter, a farmer and sporting-goods manufacturer's representative. Hunter earned a degree in drama from Carnegie Mellon University in Pittsburgh, after which she moved to New York City and roomed with fellow actress Frances McDormand. Hunter in 2008 described living in The Bronx "at the end of the D train, just off 205th Street, on Bainbridge Avenue and Hull Avenue. It was very Irish, and then you could go just a few blocks away and hit major Italian". A chance encounter with playwright Beth Henley, when the two were trapped alone in an elevator, led to Hunter's being cast in Henley's plays Crimes of the Heart, and Off-Broadway's The Miss Firecracker Contest. "It was like the beginning of 1982. It was on 49th Street between Broadway and Eighth on the south side of the street", Hunter recalled in an interview. " 10 minutes; not long. We actually had a nice conversation. It was just the two of us".

When she moved to Los Angeles, California, in 1982, Hunter shared a house with a group of people that included McDormand and director Sam Raimi, as well as future collaborators Joel and Ethan Coen.

Hunter made her screen debut in the 1981 horror movie The Burning. After moving to Los Angeles, California in 1982, Hunter appeared in TV movies before being cast in a supporting role in 1984's Swing Shift. That year, she had her first collaboration with the writing-directing-producing team of brothers Ethan Coen and Joel Coen, in Blood Simple, making an uncredited appearance as a voice on an answering-machine recording. More film and television work followed until 1987, when thanks to a starring role in the Coens' Raising Arizona and her Academy Award-nominated turn in Broadcast News, Hunter became a critically acclaimed star. She went on to the screen adaptation of Henley's Miss Firecracker; Steven Spielberg's Always, a romantic drama with Richard Dreyfuss; and the made-for-TV 1989 docudrama about the Supreme Court case Roe v. Wade.