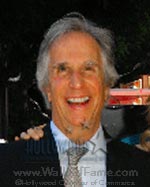 Winkler is best known for his role as Fonzie on the 1970s American sitcom Happy Days. "The Fonz," a leather-clad greaser and auto mechanic, started out as a minor character at the show's beginning but had achieved top billing by the time the show ended.

Henry Winkler was born in Manhattan, New York, the son of Ilse Anna Maria and Harry Irving Winkler, a lumber company executive. Winkler's Jewish parents emigrated from Germany to the United States in 1939, before the beginning of World War II.

Winkler attended the McBurney School and received his bachelor's degree from Emerson College in 1967 and his MFA from the Yale School of Drama in 1970. In 1978, Emerson gave Winkler an honorary doctorate of humane letters. Winkler has also received a Doctor of Humane Letters from Austin College.