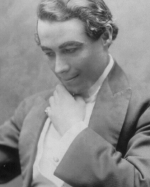 About
Henry B. Walthall

Walthall began his career as a stage actor, appearing on Broadway in a supporting role in William Vaughn Moody’s The Great Divide in 1906?1908. His career in movies began in 1908, in the film Rescued from an Eagle’s Nest, which also featured another young actor named D.W. Griffith. As the industry grew in size and popularity, Griffith emerged as a director and Walthall found himself a mainstay of the Griffith company, frequently working alongside such Griffith regulars as Owen Moore, Kate Bruce and Jack and Mary Pickford. He followed Griffith’s departure from New York’s Biograph to California’s Reliance-Majestic Studios in 1913.

Given the relatively short length of films in the early years, Walthall frequently found himself cast in dozens of films each year. For those still unfamiliar with his face however, he gained national attention in 1915 for his role as Colonel Ben Cameron in Griffith’s highly influential and controversial epic The Birth of a Nation. Walthall’s portrayal of a Confederate veteran rounding up the Ku Klux Klan won him large-scale fame, and Walthall was soon able to emerge as a leading actor in the years leading up to the 1920s, parting ways with Griffith.

He continued through the 1920s, appearing in The Plastic Age with Gilbert Roland and Clara Bow and a 1926 adaptation of The Scarlet Letter opposite Lillian Gish. Now in his 40s, he found his roles increasingly more of the “character” variety. Having experience as a stage actor, Walthall continued his career into the 1930s until his death.