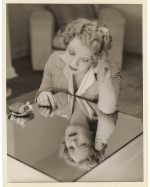 Helen Twelvetrees was an American stage and screen performer, considered a top female star in the early days of sound films.

Born Helen Marie Jurgens in Brooklyn, New York, a graduate of the American Academy of Dramatic Arts, where she met her first husband, actor Clark Twelvetrees. With some stage experience, she went to Hollywood with a number of other actors to replace the silent stars that could not or would not make the transition to talkies. Her first job was with Fox Film Corporation and she appeared in The Ghost Talks. Her career was as turbulent as her personal life. After a mere three films with Fox, she was released from her contract. However, she was signed by Pathé shortly thereafter, and along with Constance Bennett and Ann Harding, Twelvetrees starred in several lachrymose dramas, not all of which were critically acclaimed. When Pathé was absorbed by RKO Radio Pictures, she found herself at various times miscast in mediocre films. With the arrival of Katharine Hepburn at RKO, Twelvetrees left the studio to freelance.

The 1930 film Her Man set the course of her screen career, and she would forever be asked to play suffering women fighting for the wrong men. Later she played opposite Spencer Tracy in 1934’s Now I’ll Tell from a novel by Mrs. Arnold Robinson; opposite Donald Cook in The Spanish Cape Mystery; and costarred in Paramount’s A Bedtime Story with Maurice Chevalier. She also starred in two Metro-Goldwyn-Mayer films, which induced a critic to note that she “had a gift for projecting emotional force with minimal visible effort.” However, some other critics felt that she tended to overact in a few of her other appearances.