Helen Traubel was an American operatic dramatic soprano, best known for her Wagnerian roles, especially those of Brünnhilde and Isolde.

Born in St. Louis, Missouri, she made her debut as a concert singer with the St. Louis Symphony in 1923. In 1926 she got a first offer to join the Metropolitan Opera company which she turned down to continue with her studies. She didn't appear on the opera stage until May 12, 1937, when the composer Walter Damrosch to portray the role of Mary Rutledge in the world premiere of his opera The Man Without a Country.

Since the Met already had two first-class Wagnerian sopranos, Kirsten Flagstad and Marjorie Lawrence, Traubel at first had difficulty finding her niche. Her debut as a regular company member was as Sieglinde in Die Walküre, the only standard role which she had previously sung, at the Chicago Opera. Flagstad left the US in 1941 to visit her homeland of Norway and couldn't return for political reasons. The same year, Lawrence was stricken with polio and her career was curtailed.

On February 22, 1941, Traubel sang with tenor Lauritz Melchior in excerpts from Wagnerian operas on the live broadcast concert of the NBC Symphony Orchestra conducted by Arturo Toscanini. The broadcast originated from Carnegie Hall at a time when the NBC Symphony usually performed in NBC Studio 8-H. RCA Victor later released some of the music from the concert. 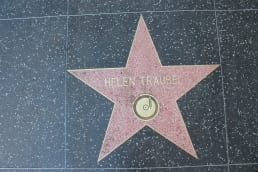