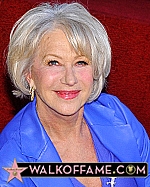 
Helen Mirren Honored with Star On The Hollywood Walk Of Fame
The Queen’s Star Is Next to the Star of the King, Colin Firth!

Watch the complete star ceremony below.

The Hollywood Chamber of Commerce proudly honored multi award-winning actress Helen Mirren with star on the Hollywood Walk of Fame at 6714 Hollywood Boulevard in front of The Pig N’ Whistle Pub on January 3, 2013

“What a way to start the New Year on the Walk of Fame with one of the most acclaimed actresses known around the world,” stated Ana Martinez, Producer of the Walk of Fame ceremonies. “We are thrilled to honor Helen and welcome her to our Walk of Fame family.”

Helen Mirren was born in Chiswick, West London and  began her acting career with the National Youth Theatre in the latter half of the 1960s. From her very first film appearance (playing the young muse to a middle-aged artist in 1969’s  Age of Consent,” Mirren displayed the sensual screen persona that would become her trademark.  Her first major role was playing Cleopatra (in Shakespeare’s “Anthony and Cleopatra”) with the NYT which launched Helen’s career.

Mirren has won international recognition for her work on stage, screen and television. For her portrayal of Queen Elizabeth II in 2006 of “The Queen,” she received an Academy Award®, Golden Globe, Screen Actors Guild (SAG) Award®, and BAFTA Award for Best Actress. She was also named Best Actress by virtually every critic’s organization from Los Angeles to London.

Mirren earned her first Oscar® nomination for her portrayal of Queen Charlotte in Nicholas Hytner’s “The Madness of King George,” for which she also won Best Actress honors at the 1994 Cannes Film Festival.  Her second Oscar® nomination came for her work in Robert Altman’s 2001 film “Gosford Park.”  Her performance as the housekeeper in that film also brought her Golden Globe and BAFTA Award nominations, several critics groups’ awards, and dual SAG Awards®, one for Best Supporting Actress and a second as part of the winning ensemble cast. Most recently, Mirren earned both Oscar® and Golden Globe nominations for her performance in the historical drama “The Last Station,” playing Sofya Tolstoy.

Mirren will also be seen in HBO’s  biopic “Phil Spector” which will air in 2013.  She stars as lawyer Linda Kenney Baden with Al Pacino as Phil Spector is due for release in 2013. Her portrayal of Emerenc in “The Door,” directed by Istvan Szabo, was recently released in Germany, Hungary and other European territories.

Among her other film credits are Terry George’s “Some Mother’s Son,” on which she also served as associate producer; “Calendar Girls,” for which she got a Golden Globe nomination; “The Clearing”; “Shadowboxer”; and “State of Play”. She starred in a screen adaptation of Shakespeare’s “The Tempest,” as Prospera in a gender twist on the classic character.

On television, Mirren starred in the award-winning series “Prime Suspect” as Detective Chief Inspector Jane Tennison.  She had earned an Emmy Award and three BAFTA Awards, as well as numerous award nominations, for her role in early installments of the “Prime Suspect” series.  She won another Emmy Award and earned a Golden Globe nomination when she reprised the role of Detective Jane Tennison in 2006’s “Prime Suspect 7: The Final Act,” the last installment in the PBS series. Most recently Mirren was also honored for her performance as Queen Elizabeth I in the HBO miniseries “Elizabeth I,” winning an Emmy Award, a Golden Globe and a SAG Award®.

Mirren has also worked extensively in the theatre.  She has received two Tony Award nominations, for her work in “A Month in the Country,” and for her role opposite Sir Ian McKellen in “Dance of Death.”

Helen Mirren became a Dame of the British Empire in 2003. 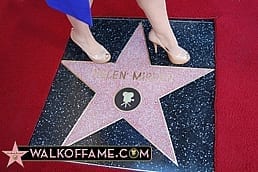