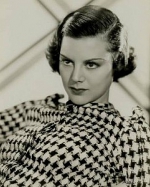 Helen Mack was an American actress. Mack started her career as a child actress in silent films, moving on to Broadway plays, and touring the vaudeville circuit. Her greater success as an actress was as a leading lady in the 1930s. Eventually Mack transitioned into performing on radio, and then into writing, directing, and producing some of the best known radio shows during the Golden Age of Radio. Later in life, Mack billed herself as a professional writer, writing for Broadway, stage, and television. Her career spanned the infancy of the motion picture industry, the beginnings of Broadway, the final days of Vaudeville, the transition to “talking pictures”, the Golden Age of Radio, and the rise of television.

Helen Mack, born Helen McDougall was the daughter of William George McDougall, a barber, and Regina McDougall, who had a repressed desire to become an actress. She obtained her education as a youth at the Professional Children’s School of New York City. Vera Gordon was a friend who helped her along as a child actress. She appeared on Broadway, in vaudeville, in stock as well as silent films. Mack debuted on stage in The Idle Inn with Jacob Benami. She performed with Roland Young in The Idle Inn and toured America with William Hodge in Straight Through The Door.

Her Fox Film screen test came in March 1931 and within three weeks she was on the studio lot. Mack began her film career, first billed as Helen Macks, in Success. The motion picture featured Brandon Tynan, Naomi Childers, and Mary Astor. In Zaza, Mack worked with Gloria Swanson. She also had a small role in D. W. Griffith’s last film The Struggle. She made her debut as a leading lady opposite Victor McLaglen in While Paris Sleeps and was cast with John Boles in his initial Fox Film venture, Scotch Valley. Mack played in several westerns in the early 1930s. Among these are Fargo Express with Ken Maynard and The California Trail with Buck Jones.