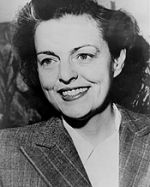 Helen Gahagan was an American actress and a politician. She was the third woman and first Democratic woman elected to Congress from California; her election made California one of the first two states to have elected female members of the House from both parties.

Gahagan was born in Boonton, New Jersey of Scottish and Irish descent, and reared Roman Catholic. Graduating from Barnard College in 1924, she became a well-known star on Broadway in the 1920s. In 1931, she married actor Melvyn Douglas. Gahagan starred in only one Hollywood movie, She in 1935, playing Hash-a-Motep, queen of a lost city. The movie, based on H. Rider Haggard’s novel of the same name, is perhaps best known for popularizing a phrase from the novel, “She who must be obeyed.”

In the 1940s, Gahagan Douglas entered politics. She was elected to the United States House of Representatives from California’s 14th congressional district as a liberal Democrat in 1944, and served three full terms. During this time she carried on an affair with Congressman Lyndon B. Johnson.Ms. Douglas was mentioned in the song “George Murphy” by satirist Tom Lehrer. The song begins, “Hollywood’s often tried to mix-show business with politics-from Helen Gahagan-to Ronald Reagan?”

In 1950, Gahagan Douglas ran for the United States Senate even though the incumbent Democrat Sheridan H. Downey was seeking a third term. William Malone, the Democratic state chairman in California, had advised Douglas to wait until 1952 to run for the Senate, rather than split the party in a fight with Downey. Gahagan Douglas, however, told Malone that Downey had neglected veterans and small growers and must be unseated. Downey withdrew from the race in the primary campaign and supported a third candidate, Manchester Boddy, the owner and publisher of the Los Angeles Daily News. When Gahagan Douglas defeated Boddy for the nomination, Downey endorsed the Republican U.S. Representative Richard M. Nixon.