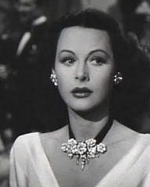 Hedy Lamarr was an Austrian-born American actress of Jewish descent. Though known primarily for her film career as a major contract star of MGM’s “Golden Age”, she also co-invented an early technique for spread spectrum communications, a key to many forms of wireless communication.

Lamarr was born Hedwig Eva Maria Kiesler in Vienna, Austria-Hungary, to Jewish parents Gertrud, a pianist and Budapest native who came from the “Jewish haute bourgeoisie”, and Lemberg-born Emil Kiesler, a successful bank director. She studied ballet and piano at age 10. When she worked with Max Reinhardt in Berlin, he called her the “most beautiful woman in Europe”. Soon the teenage girl played major roles in German movies, alongside stars like Heinz Rühmann and Hans Moser.

In early 1933 she starred in Gustav Machatý’s notorious film Ecstasy, a Czechoslovak film made in Prague, in which she played the love-hungry young wife of an indifferent old husband. Closeups of her face and long shots of her running nude through the woods gave the film notoriety.

On 10 August 1933 she married Friedrich Mandl, a Vienna-based arms manufacturer 13 years her senior. In her autobiography Ecstasy and Me, Lamarr described Mandl as an extremely controlling man who sometimes tried to keep her shut up in their mansion. The Austrian bought as many copies of Ecstasy as he could possibly find, objecting to her in the film, and “the expression on her face”.