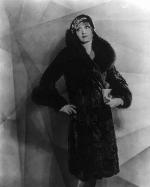 Hedda Hopper was an American actress and gossip columnist, whose long-running feud with friend turned arch-rival Louella Parsons became at least as notorious as many of Hopper’s columns.

She was born Elda Furry in Hollidaysburg, Pennsylvania, the daughter of David D. and Margaret Miller Furry, who were German Baptist Brethren. Her siblings included Dora Furry ; Sherman Furry ; Cameron Furry ; Edgar Furry ; Frank M. Furry ; and Margaret Furry. The family moved to nearby Altoona when Elda was three. Her father was a butcher who owned a shop. She eventually ran away to New York and began her career in the chorus on the Broadway stage. Hopper was not successful in this venture, even getting the axe by the renowned Shubert Brothers. Florenz Ziegfeld called the aspiring starlet a “clumsy cow” and brushed off her pleas for a slot in the Follies. After a few years, she joined the theater company of matinee idol DeWolf Hopper, whom she called “Wolfie.”

In her words, “Dancing came easy to me. And in singing, what my voice lacked in quality it made up for in volume.” Thus, she remained in the chorus and they toured the country from one end to the other. While in the Hopper company, she realized that chorus and understudy jobs were not acting. She wanted to act, and she knew she would have to prove herself before she could hope to get anywhere in the theater. Hearing that Edgar Selwyn was casting his play The Country Boy for a road tour, she went to his office and talked him into letting her audition for the lead. She was given the role and the show toured for thirty-five weeks through forty-eight states.