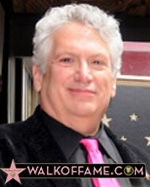 The Hollywood Chamber of Commerce proudly honored Cyndi Lauper and Harvey Fierstein, the creators of the hit Broadway musical Kinky Boots with the 2,577th and 2,578th stars respectively on the Hollywood Walk of Fame on April 11, 2016 at 11:30 a.m. PDT. Lauper’s 2,477th star was dedicated in the category of Recording and Fierstein’s 2,478th star was dedicated in the category of Live Performance at 6243 Hollywood Boulevard in front of the historic Pantages Theatre. *The Hollywood Walk of Fame makes an effort to bring celebrities together. “I scour the famous sidewalk looking for the best possible location to immortalize honorees,” said Martinez. “I’ve placed notable partners such as film producers Richard Donner and Lauren Shuler Donner next to each other’s star on the Walk of Fame. They were the first married couple to be honored on the same day with double stars on October 16, 2008. We honored married actors Felicity Huffman and William H. Macy with double stars on March 7, 2012.” There are other related celebrities who have side by side double stars but had separate ceremonies. They include: Bob and Dolores Hope, Kevin Bacon and Kyra Sedgwick, Sherry Lansing and William Friedkin, Ozzie and Harriet Nelson, Betty White and Allen Ludden to name a few.

Fans were treated with a special performance by singer Tiffany Engen who plays ‘Lauren’ in the touring company of Kinky Boots.” The national tour of Kinky Boots returns to the Pantages Theatre April 13 – April 24, 2016.  Kinky Boots, now in its 4th smash year on Broadway, is also playing hit productions in London’s West End, Toronto, with upcoming productions announced for Australia, Japan, Korea and more.

Legendary performer Cyndi Lauper is a Grammy, Emmy and Tony Award-winning artist for her Kinky Boots score. For nearly 30 sterling years and global record sales in excess of 50-million albums, Lauper has continued to capture the heart and soul of her legion of fans and keep them compelled by her every creative move. With her first album, She’s So Unusual, Lauper won a Grammy Award for Best New Artist, and became the first female in history to have four Top-Five singles from a debut album. Since then, Lauper has released ten additional studio albums and was recently inducted into the Songwriters Hall of Fame. Her upcoming 11th studio album, Detour, recorded late in 2015 in Nashville, will showcase her signature takes on classic country songs from the 1950s and 60s. The album will also feature appearances by some of country music’s most-celebrated artists.

During her storied music career, Lauper has been nominated for 15 Grammy Awards, two American Music Awards, seven American Video Awards and 18 MTV Awards. She recently captured her journey through music and life in her New York Times best-selling autobiography, Cyndi Lauper: A Memoir. As an actress, Lauper made her Broadway debut in The Threepenny Opera alongside Alan Cumming in 2006. She has appeared in numerous television shows, including “Mad About You” (Emmy Award) and “Bones,” and such films as The Opportunist with Christopher Walken, Mrs. Parker and the Vicious Circle, Life With Mikey, Off and Running and Vibes. Lauper also continues her philanthropic work through her foundation, the True Colors Fund.

Harvey Fierstein is the author of the Tony Award-winning Best Musical Kinky Boots which is currently playing on Broadway, in Toronto, in London’s West End, United States, with an Australian production set to open this year. In 2015, he revised the books for NBC’s The Wiz Live! and the sold-out London production of Funny Girl. His other Broadway writing credits include therecent hits Newsies(Tony nomination) and Casa Valentina(Tony nomination, as well asTorch Song Trilogy(Tony, Drama Desk and Obie Awards),La Cage aux Folles(Tony and Drama Desk Awards),A Catered Affair(12 Drama Desk nominations),Safe Sex(Ace Award),Legs Diamond, Spookhouse, Flatbush Tosca, Common Groundand more. His political editorials have been published inThe New York Times, theHuffington Postas well as beingbroadcast on PBS’s “In the Life.” His children’s book, The Sissy Duckling (Humanitas Award), is now in its fifth edition. As an actor, Fierstein is known worldwide for his performances in films including Mrs. Doubtfire, Independence Day,and Bullets Over Broadway. On stage, he performed in Hairspray(Tony Award),Fiddler on the Roof,La Cage aux Folles, andTorch Song Trilogy(Tony Award). On TV shows he he has been seen in “Smash,” “How I Met Your Mother,” “The Good Wife,” “Cheers” (Emmy nomination), “The Simpsons,” “Family Guy,” and “Nurse Jackie.” Fierstein has worked with numerous LGBT charities, and will be honored this June at the Logo Trailblazer Awards. 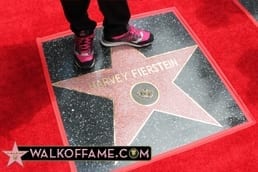