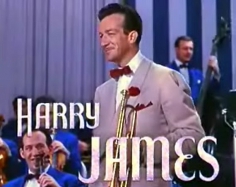 Henry Haag ?Harry? James was an American musician and bandleader. James was an instrumentalist of the swing era, employing a bravura playing style that made his trumpet work identifiable. He was one of the most popular bandleaders of the first half of the 1940s, and he continued to lead his band until just before his death, 40 years later.

He was born in Albany, Georgia, the son of a bandleader of a traveling circus. By the age of 10 he was taking trumpet lessons from his father, who placed him on a strict daily practice schedule. Each day, James was given one page to learn from the Arban’s book and was not allowed to pursue any other pastime until he had learned that particular page.

In 1931 the family settled in Beaumont, Texas, where James began playing with local dance bands.

He joined the nationally popular Ben Pollack in 1935 but at the start of 1937, left Pollack to join Benny Goodman’s orchestra, where he stayed through 1938.