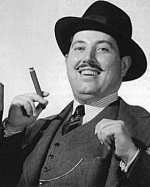 Harold Peary was an American actor, comedian and singer in radio, film, television and animation remembered best as Throckmorton P. Gildersleeve, a supporting character on radio’s Fibber McGee & Molly that moved to its own radio hit, The Great Gildersleeve, the first known spinoff hit in American broadcasting history.

Born as José Pereira de Faria in San Leandro, California to Portuguese parents, Peary began working in local radio as early as 1923, according to his own memory, and had his own show as a singer, The Spanish Serenader, in San Francisco, but moved to Chicago, Illinois in 1937.

In Chicago his radio work came to a peak when he became a regular on Fibber McGee and Molly, where he originated the Gildersleeve character as a McGee neighbor and nemesis in 1938. The character actually went through several first names and occupations before settling on Throckmorton Philaharmonic Gildersleeve and his stewardship of a lingerie factory. He also worked on the horror series Lights Out and other radio programs, but his success and popularity as Gildersleeve set the stage for the character’s own program.

Johnson’s Wax, which sponsored Fibber McGee & Molly, sponsored an audition recording for The Great Gildersleeve, and the Kraft Cheese Company signed on as the show’s regular sponsor. Gildersleeve was transplanted from Wistful Vista to Summerfield with more than just a locale change—now a bachelor, with much of his pomposity and cantankerousness toned down, he was also newly-domesticated and appointed guardian of his orphan niece Marjorie and nephew Leroy. Implicitly well-off though by no means wealthy, Gildersleeve was also depicted winding up his lingerie-making company and taking up a new life as Summerfield’s water commissioner. Peary’s Gildersleeve proved popular enough that it was thought to try the character in his own show.