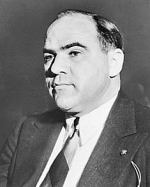 Harold Eugene “Hal” Roach, Sr. was an American film and television producer and director from the 1910s to the 1990s.

After an adventurous youth that took him to Alaska, Hal Roach arrived in Hollywood in 1912 and began working as an extra in silent film. Upon coming into an inheritance, he began producing short comedies in 1915 with his friend Harold Lloyd, who portrayed a character known as “Lonesome Luke.” In 1915 Roach married actress Marguerite Nichols. They had two children, Hal, Jr. and Margaret. Unable to expand his studios in downtown Los Angeles because of zoning, Roach purchased what became the Hal Roach Studios from Harry Culver in Culver City, California. During the 1920s and 1930s, he employed Lloyd, Will Rogers, Max Davidson, the Our Gang kids, Charley Chase, Harry Langdon, Thelma Todd, ZaSu Pitts, Patsy Kelly and, most famously, Laurel & Hardy. During the 1920s Roach’s biggest rival was producer Mack Sennett. In 1925 Roach hired away Sennett’s supervising director, F. Richard Jones.