About
H. B. Warner

H. B. Warner was an English actor. He was born Henry Byron Charles Stewart Warner-Lickford in St John's Wood, London, England in 1875. His father, Charles Warner, was an actor, and, although young Henry had initially thought about studying medicine, he eventually followed in his father's footsteps and performed on the stage.

Warner began his film career in silent films in 1914, when he debuted in The Lost Paradise. He played lead roles, culminating in the role of Jesus Christ in Cecil B. DeMille's silent film epic, The King of Kings in 1927. Following that film, he was usually cast in dignified roles, in such movies as the 1930 version of Liliom, Grand Canary, the 1935 version of A Tale of Two Cities, Mr. Deeds Goes to Town, the original 1937 version of Lost Horizon, You Can't Take It with You, Mr. Smith Goes to Washington, The Rains Came, and The Corsican Brothers. In It's a Wonderful Life he played what was for him, an atypical role, as the drunken druggist. He also appeared in Sunset Boulevard and The Ten Commandments. Occasionally, Warner was seen in a sinister role, as in the 1941 film version of The Devil and Daniel Webster, in which he played the ghost of John Hathorne as well as Topper Returns from the same year.

Warner was married twice, to Rita Stanwood in 1919 and to F.R. Hamlin. 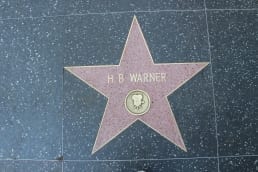