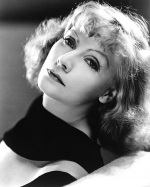 Greta Garbo was a Swedish actress primarily known for her work in the United States during Hollywood’s silent film period and part of its subsequent Golden Age. Once moving to Hollywood, she appeared in only 27 movies, yet she remains one of the most popular and recognizable Hollywood stars. The MGM marketing ploy “Garbo talks” became a catch-phrase of the 1930s. Her popularity with the Depression-era audiences allowed her to dictate the terms of her contract in 1932, and she became increasingly choosy about her roles. After 1941, she accepted no more roles, and retired to an apartment in New York City.

Regarded as one of the greatest and most inscrutable movie stars ever produced by Metro-Goldwyn-Mayer and the Hollywood studio system, Garbo appeared in both the silent and the talkies era of film-making. She was one of the few silent movie actresses to successfully negotiate the transition to sound, which she achieved in 1930’s Anna Christie, for which she was nominated for an Academy Award. She appeared twice as the fabled Anna Karenina, once in 1927’s silent film, Love, and in 1935’s Anna Karenina, for which she received the New York Film Critics Circle Award for Best Actress. She considered her 1936 performance as the courtesan Marguerite Gautier as her best performance and that role in Camille earned her a second Academy Award nomination. During the World War II era, MGM attempted to recast the somber and melancholy Garbo into a comic actress, in 1939’s Ninotchka, which MGM touted with the tagline, “Garbo laughs,” followed by 1941’s Two-Faced Woman, in which Garbo danced and sang. For Ninotchka, Garbo was again nominated for an Academy Award; Two-Faced Woman did well at the box office, but was a critical failure. Garbo received a 1954 Honorary Academy Award.

Garbo reportedly entered into a variety of intimate liaisons with men and women, but her long-standing relationship appeared to be with the leading man, John Gilbert, whom she agreed to marry but she failed to show up for her wedding. In her retirement, during which she became increasingly reclusive, she lived in New York City. A 1986 Sidney Lumet film, Garbo Talks, reflected the continuing popular obsession with the star. Until the end of her life, Garbo-watching became a sport among the paparazzi and the media, but she remained elusive. She died in 1990.