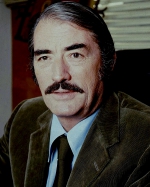 Gregory Peck was an American actor. One of 20th Century Fox’s most popular film stars from the 1940s to the 1960s, Peck continued to play important roles well into the 1990s. His notable performances include that of Atticus Finch in the 1962 film To Kill a Mockingbird, for which he won his Academy Award.

President Lyndon Johnson honored Peck with the Presidential Medal of Freedom in 1969 for his lifetime humanitarian efforts. In 1999, the American Film Institute named Peck among the Greatest Male Stars of All Time, ranking at #12.

Peck was born Eldred Gregory Peck in San Diego, California’s seaside community of La Jolla, the son of Missouri-born Bernice Mae “Bunny” and Gregory Pearl Peck, who was a chemist and pharmacist. Peck’s father was of English and Irish heritage, and his mother was of Scots and English ancestry. Peck’s father was a Catholic and his mother converted upon marrying his father. Peck’s Irish-born paternal grandmother, Catherine Ashe, was related to Thomas Ashe, who took part in the Easter Rising fewer than three weeks after Peck’s birth and died while on hunger strike in 1917. Peck’s parents divorced by the time he was six years old and he spent the next few years being raised by his maternal grandmother.

Peck was sent to a Roman Catholic military school, St. John’s Military Academy, in Los Angeles at the age of 10. His grandmother died while he was enrolled there, and his father again took over his upbringing. At 14, Peck attended San Diego High School and lived with his father. When he graduated, he enrolled briefly at San Diego State Teacher’s College, joined the track team, took his first theatre and public-speaking courses, and joined the Epsilon Eta fraternity. He stayed for just one academic year, thereafter obtaining admission to his first-choice college, the University of California, Berkeley. For a short time, he took a job driving a truck for an oil company. In 1936, he declared himself a pre-medical student at Berkeley, and majored in English. Since he was 6’3″ and very strong, he also decided to row on the university crew.