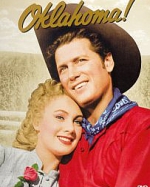 Albert Gordon MacRae was an American actor and singer, best known for his appearances in the film versions of two Rodgers and Hammerstein musicals, Oklahoma! and Carousel. Born in East Orange, New Jersey, MacRae graduated from Deerfield Academy in 1940 and served as a navigator in the United States Army Air Forces during World War II. Prior to this, he attended Nottingham High School in Syracuse, NY.

He made his Broadway debut in the mid-1940s, acquiring his first recording contract soon afterwards. Many of his hit recordings were made with Jo Stafford. It was in 1948 that he appeared in his first film, The Big Punch, a non-musical boxing drama. He soon began an on-screen partnership with Doris Day and appeared with her in several films.

In 1951, he starred with Doris Day in On Moonlight Bay, followed by the sequel By the Light of the Silvery Moon in 1953. That same year, he also starred opposite Kathryn Grayson in the third film version of The Desert Song. This was followed by leading roles in two major films of Rodgers and Hammerstein musicals, Oklahoma! and Carousel, both movies opposite Shirley Jones.