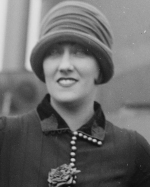 Gloria Swanson was an American actress. She was most prominent during the silent film era as both an actress and a fashion icon, especially under the direction of Cecil B. DeMille. In 1929, Swanson successfully transitioned to talkies with The Trespasser. However, personal problems and changing tastes saw her popularity wane during the 1930s. Today she is best known for her role as Norma Desmond in the film Sunset Boulevard. Swanson was born Gloria Josephine May Swanson in a small house in Chicago, Illinois, the daughter of Adelaide and Joseph Theodore Swanson, a soldier. She attended Hawthorne Scholastic Academy. Her father, whose surname was originally “Svensson”, was from a strict Lutheran Swedish American family, and her mother was of German, French and Polish ancestry. Swanson herself was as a Lutheran. She grew up mainly in Chicago, Puerto Rico and Key West, Florida. It was not her intention to enter show business. Her parents separated when she was still in school. After her formal education ended, she went to a small film studio in Chicago for a visit and ended up being asked to come back to work as an extra.

She made her film debut in 1914 as an extra in The Song of Soul for Chicago’s Essanay Studios. While on a tour of the studio, she asked to be in the movie just for fun. Essanay hired her to feature in several movies, including His New Job, directed by and starring Charlie Chaplin. Swanson auditioned for the leading female role in His New Job, but Chaplin did not see her as leading lady material and cast her in the brief role of a stenographer. She later admitted that she hated slapstick comedy and had been deliberately uncooperative.

Swanson moved to California in 1916 to appear in Mack Sennett’s Keystone comedies opposite Bobby Vernon, and in 1919 she signed with Paramount Pictures and worked often with Cecil B. DeMille, who turned her into a romantic lead in such films as Don’t Change Your Husband, Male and Female, with the famous scene in the lion cage, Why Change Your Wife?, Something to Think About and The Affairs of Anatol .