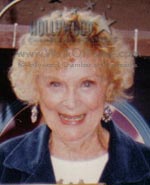 Gloria Frances Stuart is an American actress. Over a Hollywood career that has spanned more than 70 years, Stuart appeared on stage, in television and film, and is best known for her roles as Claude Rains' sweetheart in The Invisible Man and as Old Rose in her Academy Award nominated role in the film Titanic.

On July 4, 1910, Gloria Frances Stewart was born in Santa Monica, a third generation Californian. Her mother, Alice Vaughn Stewart, was born in Angel's Camp. Her father, Frank Stewart, was an attorney representing many of the Chinese Tongs in San Francisco. Gloria's brother, Frank, came 11 months later.a second brother, Thomas, died in infancy. Frank Stewart had been appointed a judge and was about to take the bench when he was hit by a car and died. Gloria was nine. Alice got a job in the Ocean Park U.S. Post Office to support her children, then accepted a proposal of marriage from Fred J. Finch, a rough-and-tumble Kentuckian who loved the horses, owned a local funeral parlor and oil leases in Texas. Gloria's half-sister, Patsy–Patricia Marie Finch–came along in 1914. Young Frank took Finch's name and became a noted sportswriter for the Los Angeles Times, following the Dodgers until his retirement. Frank Stewart was descended from royal Scots, but Gloria changed the spelling when she began her career because 'Stuart' fit better on a marquee.

Gloria attended Santa Monica High School, graduating in 1927, then immediately ran off to Berkeley to attend the University of California. At Cal, she majored in drama and philosophy but dropped out in her junior year to marry Gordon Newell, a San Francisco sculptor working under Ralph Stackpole on the facade of the San Francisco Stock Exchange. The Newells lived a bohemian life in Carmel, were part of a circle of artists including Ansel Adams, Edward Weston, and Robinson Jeffers. Gloria acted at the Carmel playhouse and worked on the Carmel newspaper. Returning to Los Angeles, she appeared at the Pasadena Playhouse and was immediately signed to a contract by Universal Studios. Elegant, intelligent, and extraordinarily beautiful, she became a favorite of the English director, James Whale, appearing in his The Old Dark House, The Kiss Before The Mirror, and The Invisible Man.

Stuart was an activist and became a founding member of the Screen Actors Guild, but her career with Universal was disappointing. She moved to 20th Century Fox, and by the end of the decade had appeared in forty-two films, including Busby Berkeley's Gold Diggers of 1935 and Rebecca of Sunnybrook Farm. Among the stars she appeared with was Melvyn Douglas, Lionel Barrymore, Dick Powell, Raymond Massey, Boris Karloff, and Shirley Temple. Stuart was a versatile female lead but was never given the roles that would make her a major star, a source of great frustration.