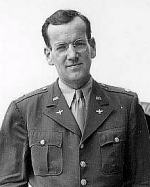 Alton Glenn Miller was an American jazz musician, arranger, composer, and bandleader in the swing era. He was one of the best-selling recording artists from 1939 to 1943, leading one of the best known “Big bands”. Miller’s signature recordings include In the Mood, American Patrol, Chattanooga Choo Choo, Tuxedo Junction, Moonlight Serenade, Little Brown Jug and Pennsylvania 6-5000. While traveling to entertain U.S. troops in France during World War II, Miller’s plane disappeared in bad weather over the English Channel. His body has never been found.

Miller was born on a farm in Clarinda, Iowa, to Lewis Elmer Miller and Mattie Lou. He went to grade school in North Platte in western Nebraska. In 1915, Miller’s family moved to Grant City, Missouri. Around this time, Miller had finally made enough money from milking cows to buy his first trombone and played in the town orchestra. In 1918, the Miller family moved again, this time to Fort Morgan, Colorado, where Miller went to high school. During his senior year, Miller became very interested in a new style of music called “dance band music.” He was so taken with it that he formed his own band with some classmates. By the time Miller graduated from high school in 1921, he had decided he wanted to become a professional musician.

In 1923, Miller entered the University of Colorado at Boulder, where he joined Sigma Nu Fraternity, but spent most of his time away from school, attending auditions and playing any gigs he could get, most notably with Boyd Senter’s band in Denver. He dropped out of school after failing three out of five classes one semester, and decided to concentrate on making a career as a professional musician. He later studied the Schillinger technique with Joseph Schillinger, under whose tutelage he composed what became his signature theme, Moonlight Serenade.

In 1926, Miller toured with several groups, eventually landing a good spot in Ben Pollack’s group in Los Angeles. During his stint with Pollack, Miller wrote several musical arrangements of his own. He also co-wrote his first composition, “Room 1411”, written with Benny Goodman and released as a Brunswick 78. In 1928, when the band arrived in New York City, he sent for and married his college sweetheart, Helen Burger. He was a member of Red Nichols’s orchestra in 1930, and because of Nichols, Miller played in the pit bands of two Broadway shows, Strike Up the Band and Girl Crazy .