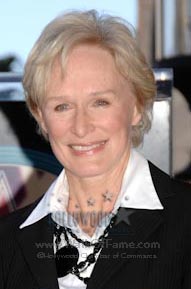 Glenn Close was honored with the 2,378th star on the Hollywood Walk of Fame. Leron Gubler, President and CEO of the Hollywood Chamber of Commerce presided over the ceremony. Guests included Michael Chiklis, Jobeth Williams, MaryKay Place, and Tate Donovan.

Emmy, Golden Globe and Tony Award winning actress Glenn Close headlines her first television series as high-stakes litigator Patty Hewes in the Sony Pictures Television critically acclaimed original legal thriller Damages for FX. She won last year's Emmy Award as "Best Actress in a Drama Series," a Golden Globe (and was nominated for a SAG Award) as "Best Actress in a TV Drama" for her riveting performance on that show. Prior to Damages, Close won rave reviews and an Emmy nomination for her portrayal of Captain Monica Rawling in a season-long story arc on FX's Emmy winning series The Shield.

Glenn Close made her feature film debut in George Roy Hill's The World According to Garp. Her performance in the film earned her awards from the Los Angeles Film Critics Association and the National Board of Review as well as an Academy Award nomination. She was subsequently Oscar-nominated for her performances in The Big Chill, The Natural; the smash Fatal Attraction; and Dangerous Liaisons.

Close's other films include: Jagged Edge; Reversal of Fortune, Hamlet; Meeting Venus; The Paper; 101 Dalmatians; 102 Dalmatians; Air Force One; Cookie's Fortune; Le Divorce, Heights, Things You Can Tell Just by Looking at Her and Nine Lives, and Evening.

She has been nominated eight other times for a Golden Globe Award, winning for her performance in Andrei Konchalovsky's television adaptation of The Lion in Winter (which also earned her a Screen Actors Guild Award).

Her other notable films for television include the taped staging of The Elephant Man; Something About Amelia, Stones for Ibarra, In the Gloaming (for which she won a CableACE Award) and the musical remake of South Pacific, in which she starred and sang as Nellie Forbush, and which she executive-produced. She executive produced and starred thrice opposite Christopher Walken in the Sarah, Plain and Tall trilogy, directed, alternately, by Glenn Jordan and Joseph Sargent.

Glenn Close made her professional theater, and Broadway debut in Harold Prince's revival of Love for Love. Other early stage credits include The Crucifer of Blood and the adaptation of The Singular Life of Albert Nobbs, for which she won an Obie Award. Close's first Tony Award nomination came for her role in the musical Barnum and she subsequently won Tony Awards for her performances in The Real Thing and Death and the Maiden.

For her portrayal of Norma Desmond in Andrew Lloyd Webber's musical Sunset Boulevard, Close won a Tony Award, a Drama Desk Award, a Los Angeles Drama Critics Circle Award and a Dramalogue Award. She would later reteam with the show's director, Trevor Nunn, in London for his Royal National Theatre revival of A Streetcar Named Desire.

She has been honored with a Crystal Award from Women in Film; a GLAAD Media Award, a People's Choice Award, the National Association of Theatre Owners' Female Star of the Year award at ShoWest and a Gotham Award for her contributions to the New York independent filmmaking community.

Close is a trustee emeritus of The Sundance Institute, with which she has been associated for more than 17 years. She is also a trustee of The Wildlife Conservation Society and volunteers at Fountain House in New York City, a facility dedicated to the recovery of men and women who suffer with mental illness.