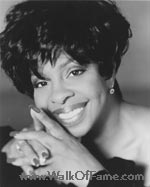 Gladys Maria Knight, known as the “Empress of Soul”, is an American R&B/soul singer-songwriter, actress, businesswoman, humanitarian, and author. She is best known for the hits she recorded during the 1960s and 1970s, for both the Motown and Buddah Records labels, with her group Gladys Knight & the Pips, the most famous incarnation of which also included her brother Merald “Bubba” Knight and her cousins Edward Patten and William Guest.

Knight was born in Atlanta, Georgia, the daughter of Sarah Elizabeth and Merald Woodlow Knight, Sr., a postal worker. She first achieved minor fame by winning Ted Mack’s Original Amateur Hour TV show contest at the age of 7 in 1952. The following year, she, her brother Merald, sister Brenda, and cousins William and Elenor Guest formed a musical group called The Pips. By the end of the decade, the act had begun to tour, and had replaced Brenda Knight and Eleanor Guest with Gladys Knight’s cousin Edward Patten and friend Langston George.

Knight discovered she was pregnant in 1960, and married her high school sweetheart James Newman. After a miscarriage, Knight returned to performing with the Pips. In 1961, Bobby Robinson produced the single “Every Beat of My Heart” for the group, which became a #1 R&B and #6 pop hit when released on Vee-Jay Records. In 1962, Langston George left the group, which at that time renamed itself Gladys Knight & the Pips and continued as a quartet.

In 1962, after scoring a second hit, “Letter Full of Tears”, Knight became pregnant again and gave birth to a son, Jimmy III, that year. She retired from the road to raise her child while The Pips toured on their own. After giving birth in 1963 to a daughter, Kenya, Knight returned to recording with the Pips in order to support her family.