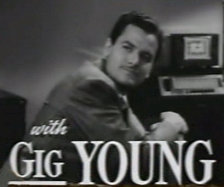 Gig Young was an American film, stage, and television actor.

Born Byron Elsworth Barr in St. Cloud, Minnesota, his parents John and Emma Barr raised him and his older siblings in Washington D.C. He developed a passion for the theatre while appearing in high school plays, and after some amateur experience he applied for and received a scholarship to the acclaimed Pasadena Community Playhouse. While acting in Pancho, a south-of-the-border play by Lowell Barrington, he and the leading actor in the play, George Reeves, were spotted by a Warner Brothers talent scout. Both actors were signed to supporting player contracts with the studio. His early work was uncredited or as Byron Barr, but after appearing in the 1942 film The Gay Sisters as a character named “Gig Young”, the studio decided he should adopt this name professionally.

Young appeared in supporting roles in numerous films during the 1940s, and came to be regarded as a popular and likable second lead, playing the brothers or friends of the principal characters. Young took a hiatus from his movie career and enlisted in the United States Coast Guard in 1941 where he served as a pharmacist’s mate until the end of World War II. After Young’s return from the war, Warner Bros. dropped his option. He then began freelancing at various studios, eventually obtaining a contract with Columbia Pictures before returning to freelancing. During those years, Young began to play the type of role that he would become best known for, a sardonic but engaging and affable drunk. His dramatic work as an alcoholic in the 1951 film Come Fill the Cup and his comedic role as a tipsy but ultimately charming intellectual in Teacher’s Pet earned him nominations for Academy Award for Best Supporting Actor.

In 1955, Young became the host of Warner Bros. Presents, an umbrella title for three television series that aired during the 1955-56 season on ABC Television. Later, he starred on the 1964-65 NBC series The Rogues, sharing appearances on a rotating basis with David Niven and Charles Boyer in the Four Star Television production.