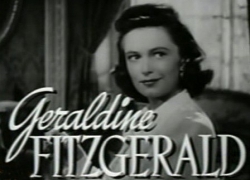 Geraldine Fitzgerald was an Irish-American actress and a member of the American Theatre Hall of Fame.

Fitzgerald was born in Greystones, County Wicklow, south of Dublin, the daughter of Edith and Edward Fitzgerald, who was an attorney. Her father was Catholic and her mother a Protestant who converted to Catholicism. She was a great-aunt of the actress Tara Fitzgerald, and a cousin of the British novelist Nevil Shute.

Inspired by her aunt, the actress/director Shelah Richards, Geraldine Fitzgerald began her acting career in 1932 in theatre in her native Dublin before moving to London in 1934 to appear in British films. She quickly came to be regarded as one of the British film industry’s most promising young performers and her most successful film of this period was The Mill on the Floss. Her success led her to America and Broadway in 1938, and while appearing opposite Orson Welles in the Mercury Theatre production of Heartbreak House, she was seen by the film producer Hal B. Wallis who signed her to a seven-year film contract. She achieved two significant successes in 1939; she received a nomination for an Academy Award for Best Supporting Actress for her role as Isabella Linton in Wuthering Heights and had an important role in Dark Victory, with both films achieving great box office success.