Georgia Gibbs was an American singer, most popular in the 1950s.

Gibbs was born Frieda Lipschitz, in Worcester, Massachusetts, the youngest of four children of Russian Jewish descent. Her father died when she was six months old, and she spent her first seven years in an orphanage in Worcester, separated from her other siblings.

She revealed a natural talent for singing at a young age, and was given the lead in the orphanage's yearly variety show. She was reunited with her mother when the latter found employment as a midwife. However, her job often forced her to leave her daughter alone for weeks at a time with only a Philco radio for company.

Gibbs began her professional career at the age of thirteen, and was singing in Boston's Raymor Ballroom the following year. She recorded her first record with the Hudson-DeLange Orchestra in 1936. "You don't really know loneliness unless you do a year or two with a one-night band, Gibbs said of her life on the big band circuit, "sing until about 2 a.m. Get in a bus and drive 400 miles. Stop in the night for the greasy hamburger. Arrive in a town. Try to sleep. Get up and eat." 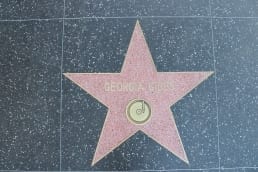