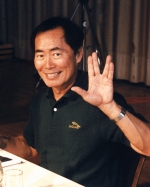 George Hosato Takei Altman is an American actor, best known for his role in the television series ‘, in which he played Hikaru Sulu, helmsman of the. He is an outspoken proponent of gay rights and active in state and local politics as well as continuing his acting career. He has won several awards and accolades in his work on human rights and Japanese-American relations, including his work with the Japanese American National Museum.

In 1942, the Takei family was originally housed in the horse stables of Santa Anita Park before being sent to the Rohwer War Relocation Center for internment in Arkansas. The family was later transferred to the Tule Lake War Relocation Center in California. Despite this experience, the family developed a renewed dedication and remained involved in the American democratic process. He and his family returned to Los Angeles at the end of World War II. He attended Mount Vernon Junior High School, where he served as student body president, and Los Angeles High School. He enrolled in the University of California at Berkeley where he studied architecture. Later he attended the University of California at Los Angeles, where he received a bachelor of arts in theater in 1960 and a master of arts in theater in 1964. He attended the Shakespeare Institute at Stratford-Upon-Avon in England, and Sophia University in Tokyo, Japan. In Hollywood, he studied acting at the Desilu Workshop. Takei is fluent in English and Japanese.

Takei began his career in Hollywood in the late 1950s, at a time when Asian faces were rarely seen on television and movie screens. His first role was providing voiceover for several characters in the English dub of Japanese monster films such as Godzilla Raids Again and Rodan, followed by an appearance in the Emmy award winning television series Playhouse 90. Takei subsequently appeared alongside such actors as Richard Burton in Ice Palace, Jeffrey Hunter in Hell to Eternity, Alec Guinness in A Majority of One, James Caan in Red Line 7000 and Cary Grant in Walk Don’t Run. He played Captain Nim, an ARVN LLDB officer alongside John Wayne’s character in the 1968 Vietnam War era film, The Green Berets. He starred in The Encounter, a controversial episode of the Emmy Award winning television show The Twilight Zone.

He had an uncredited role in the 1963 film PT-109 as the helmsman who steers the Japanese destroyer over John F. Kennedy’s PT-109. He appeared in Walk Don’t Run with Cary Grant and Samantha Eggar and he starred in an episode of ‘ during that show’s first season in 1966. He also appeared in two Jerry Lewis comedies, The Big Mouth and Which Way to the Front?