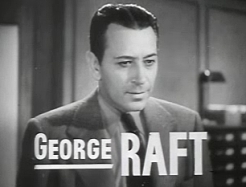 George Raft was an American film actor identified with portrayals of gangsters in crime melodramas of the 1930s and 1940s. Today George Raft is mostly known for his role in Billy Wilder’s 1959 comedy Some Like it Hot and also Scarface, Bolero, and They Drive by Night. Raft was born George Ranft in Hell’s Kitchen, New York City to German immigrant Conrad Ranft and his wife Eva Glockner. A boyhood friend of gangster Owney Madden, he admittedly narrowly avoided a life of crime.

As a young man he showed aptitude in dancing, and with his elegant fashion sense, this enabled him to gain employment as a dancer in New York City nightclubs. He became part of the stage act of Texas Guinan and his success led him to Broadway where he again worked as a dancer. He worked in London as a chorus boy in the early 1920s.

Vi Kearney, later a dancer in shows for Charles Cochran and Andre Charlot, was quoted as saying: