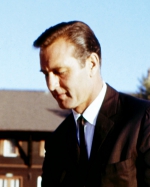 George Montgomery was an American painter, sculptor, furniture craftsman, and stuntman who is best known as an actor in western style film and television.

Born George Montgomery Letz to Ukrainian immigrant parents in Brady, Montana, the youngest of fifteen children. He was raised on a large ranch where as a part of daily life he learned to ride horses and work cattle. Letz studied at the University of Montana but because he was more interested in a career in film, he left after a year to go to Hollywood. At Republic Pictures, his cowboy skills got him stunt work and a small acting part at the age of 18 in a 1935 film, The Singing Vagabond.

He followed this with bit parts and additional stunt work as George Letz in mostly low-budget films. He was frequently cast in western films starring their number one box office draw, the singing cowboy, Gene Autry. Elevated to more important secondary roles, in 1938 he appeared as one of the six men suspected of being the titular hero in The Lone Ranger. He remained with Republic Pictures until 1940 when he signed with 20th Century Fox, which billed him as George Montgomery.

At Fox, Montgomery appeared in more westerns including The Cisco Kid and the Lady with Cesar Romero. In 1942, he played opposite Gene Tierney in China Girl, jazz musician Glenn Miller in Orchestra Wives, and Ginger Rogers in Roxie Hart. The following year, Montgomery starred with Betty Grable in the Walter Lang-directed film, Coney Island.